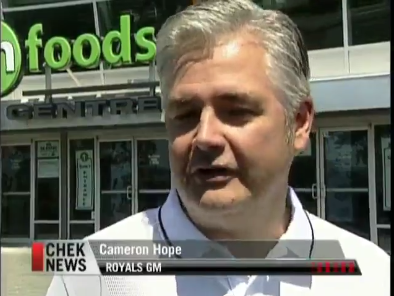 The Victoria Royals have put forth their application to host the 2016 Memorial Cup.

“I think Victoria is a natural spot to have an event like the Memorial Cup”, said Royals GM Cam Hope.

“We’ve got a great arena, right downtown.  I think the team will be competitive for the 2015-16 season…so I thought we’d throw our hat in.”

It would be a first for the Capital to host the CHL Championship Tournament.

“We’ve got a terrific spot, great hockey community and a great arena.” Said Hope on what he feels favours the bid.

The application is just the first of several stages, according to Hope.

“The league does a review of the franchise, the amenities, the City, the arenas, the airports…and also of our team, and whether they think it’s a Club that would be worthy of hosting the Cup.”

They join in along with Vancouver’s bid to host again (2007), while Red Deer has shown intent.  Alberta has not hosted the tournament since Calgary did in 1974.

“I think Victoria is an obvious choice to have the Memorial Cup in either 2016 or 2019.  Which one we really want to pitch hard for, will be probably be decided by who’s pitching this time.” Said Hope.

The deadline for applications is Tuesday, July 15.

-Marlon Martens
Royals Play By Play on The Zone @ 91.3 fm

The Victoria Royals have submitted an initial expression of interest to host the 2016 Memorial Cup national major-junior championship by today’s deadline.

The Western Hockey League is up in 2016 in the three-league hosting rotation that includes the Ontario Hockey League and Quebec Major Junior League.

“This is just the first step that starts the process. It’s a several-step procedure. There are a whole bunch of other steps to follow, and that’s when the process really starts,” said Royals GM Cam Hope.

“Victoria would be a great place to have it. This city seems to be made for hosting an event such as this.”

A more detailed proposal will be submitted by the bidding cities in September. A final decision is expected sometime in the fall.

The Vancouver Giants, who hosted the 2007 Memorial Cup, announced they will be bidding again for 2016. Red Deer is also expected to submit an expression of interest by today’s deadline.

Factors in Red Deer’s favour could include that it also bid for the 2013 Memorial Cup but lost to Saskatoon and that an Alberta city has not hosted the Memorial Cup since Calgary in 1974. Four decades is a long time to wait.

“We have to be pragmatic about such issues as how many cities have bid before and not won,” noted Hope.

“Our biggest hurdle is our newness [the Chilliwack Bruins-Victoria Royals franchise is just eight years old, with the first five years playing in Chilliwack and the last three in Victoria] and that we’ve never bid before.”

The next opportunity for WHL teams to bid after 2016 is when the league hosts the Memorial Cup again in 2019.

The two-round draft took place online with the order of selection rotating through each of the CHL’s three leagues using an inverse order of final regular season standings from the 2013-14 season.  Each team in the CHL is permitted to carry two European import players each season who are selected annually through the CHL Import Draft.

The Lethbridge Hurricanes were the first WHL Club to make a selection, choosing Russian left wing Nikita Milekhin with the third overall pick.  In 26 games with Dynamo Moscow of the Russian junior league, he had 13 goals and eight assists. Milekhin is eligible for the 2015 NHL Draft.

All but two WHL clubs selected at least one player in the 2014 CHL Import Draft.  The Prince George Cougars and the Portland Winterhawks did not select a player in the draft. 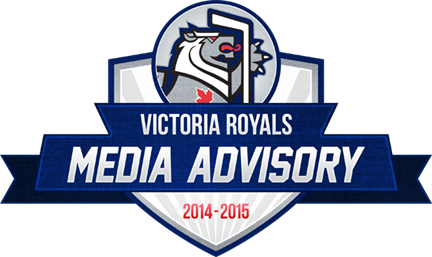 Victoria, BC – The Victoria Royals are proud to announce that they have drafted Slovakian winger Kristian Ferletak this morning in the 2014 Canadian Hockey League (CHL) Import Draft.

The Royals selected the 5-10, 181 lb forward with the 54th overall pick in the annual draft which includes all three leagues (Ontario Hockey League, Quebec Major Junior Hockey League and Western Hockey League) in the CHL.

“We did a lot of research on Kristian and we think he will be a very good addition to our forward group,” Royals’ General Manager Cameron Hope said. “He is a strong skater with skill. We think his game will translate well to the Western Hockey League.”

The Trstena, Slovakia native spent the 2013-14 season with the Slovakian U-18 Team where he scored 32 points (9g-23a) and added 72 penalty minutes in 44 games played. Ferletak also represented his country at the 2014 IIHF Under-18 World Championship where he chipped in three points (2g-1a) through five games.

Ferletak spent the 2012-13 hockey season with HC Banska Bystrica U-18 of the Slovakian Under-18 league where he scored 27 points (6g-21a) along with 18 minutes in penalties in 27 games played. Ferletak also appeared in 10 games with the HC Banska Bystrica U-20 team where he recorded three points (1g-2a). The 17-year-old also skated at the 2013 World Under-17 Hockey Challenge for Slovakia where he notched one assist in five contests.

Season ticket packages for the 2014-15 season are on sale now! Call 250-220-7889, visit www.selectyourtickets.com, or head down to the Victoria Royals ticketing office at Save-On-Foods Memorial Centre for more information.
Posted by Marlon Martens at 10:44