The Victoria Royals made 11 selections at the 2016 Bantam Draft Thursday.

The Royals acquired 6 Forwards, 3 Defenseman and 1 Goaltender.  With their first pick, Victoria took a mobile and offensive defenseman in Luke Reid.

Overall the club took 7 Canadian born players, (3 from BC, 2 from Saskatchewan, 1 from both Alberta and Manitoba) and 4 from the USA.

Victoria also acquired ’98 born forward Blake Bragar from the Moose Jaw Warriors for a conditional 8th round pick in 2018.

The Royals traded their 1st round pick (21st overall) to the Edmonton Oil Kings for their 2nd and 3rd round picks (27th and 49th).

Calgary, AB- The Victoria Royals are proud to announce the selection of 11 players at the 2016 WHL Bantam Draft in Calgary, AB today.

Of the Royals’ 11 draft picks British Columbia contributed three players, while Saskatchewan supplied two skaters. Manitoba and Alberta each provided one player. Victoria’s remaining four selections were drafted from the United States with three from Minnesota and one from Colorado. By position the Royals selected seven forwards, three defencemen and one goalie.

The Royals traded their first round pick, 21st overall, to the Edmonton Oil Kings for their second round, 27th overall, and third round, 49th overall selections.

The Royals used their first pick of the draft, 27th overall, to select defenceman Luke Reid from the Battleford Stars of the Saskatchewan Midget AAA Hockey League (SMAAAL). Reid, a 5-11, 180 lb blueliner, suited up in 43 games and amassed 15 points (6g-9a) to finish the regular season second in team scoring amongst defencemen. The Warman, SK native also collected one assist in three playoff games.

With the 49th overall pick, Victoria drafted defenceman Jonathon Lambos. The product of Winnipeg, MN spent the 2015-16 campaign with the Winnipeg Monarchs of the Winnipeg AAA Hockey League (WBAAA) where he scored 43 points (15g-28a) in 32 games. The 5-9.5, 170 lb Lambos also collected 11 points (2g-9a) in eight contests as the Monarchs captured the Winnipeg Bantam 2 City Championships.

“Jonathon is an offensive defenseman who is able to lead the rush and is responsible in his own zone,” Armstrong said. “He’s very comfortable with handling and distributing the puck.”

Victoria's fourth round selection, 69th overall, was used to draft 5-8.5, 135 lb forward Tarun Fizer. The native of Chestermere, AB most recently played for the Rocky Mountain Raiders of the Alberta Major Bantam Hockey League (AMBHL) where he collected 33 goals and 24 assists for 57 points in 36 games.

“Tarun plays with tremendous pace and has a willingness to take the puck to the net,” Armstrong said. “He sees the ice very well and can make elite passes.”

With their second pick in the fourth round, 81st overall, the Royals selected forward Luke Mylymok. During the 2015-16 season, Mylymok played for the Notre Dame Bantam Hounds of the South Saskatchewan Minor Hockey League (SSMHL). The 5-9, 155 lb left winger played in 38 games and registered 59 points (26g-33a) and 54 penalty minutes.

“Luke is an offensive forward who has great finish and tremendous instincts going to the net,” Armstrong said.

The club used the 88th overall pick in the fourth round to draft Tyus Gent. The Delta, BC native spent the 2015-16 season with the Delta Hockey Academy Bantam Varsity team of the Canadian Sport School Hockey League (CSSHL). Through 16 games, Gent tallied 40 points (23g-17a) and finished first in team scoring. Gent also led the team in playoff scoring with six points (3g-3a) in four contests.

“Tyus is a hardworking offensive player,” Armstrong said. “His instincts are very high, and he can read the play well.”

With the 132nd overall selection, the Royals chose 5-10, 149 lb forward Elan Bar-Lev-Wise from the Burnaby Winter Club of the Pacific Coast Bantam Hockey League (PCBHL). The product of Vancouver, BC help lead his team to a 6-0-0 record and also collected three points (2g-1a) in five games with the BC U16 Stars at the 2016 BC Cup.

"Elan is a great energy player," Armstrong said. “He’s very intelligent and has great instincts in all three zones.”

"Mason is an elite offensive player with great instincts," Armstrong said.  "He plays at an extremely high pace and has an incredible IQ with the puck.”

The Royals’ second selection of the round was used to pick 6-0, 165 lb winger Isaac Alvarado 154th overall from the Burnaby Winter Club A2 team of the PCBHL. Alvarado helped Burnaby to a 32-8-0 record this season, and collected five points (3g-2a) at the Presidents’ Day Invitational Tournament in Phoenix, AZ this year.

“Isaac’s a big power forward who has a nose for the net and is willing to engage in physical battles,” Armstrong said.

Victoria selected Shane Griffin with the 159th selection. Griffin, a forward, spent the 2015-16 season with the Lakeville North Panthers of the Minnesota High School League (MN-HS).

"Shane’s a power forward who skates extremely well," Armstong said. "He has a great shot and pro potential."

With their second pick of the round, 170th overall, the Royals drafted goaltender Brock Gould from the Colorado Thunderbirds of the Colorado Amateur Hockey Association (T1EH14). The 6-1, 140 lb netminder played in six games where he picked up a 4-1 record to go with a 1.40 goals against average, a 0.935 save percentage and two shutouts.

"Brock is a very athletic goaltender who has great size," Armstrong said.

Victoria’s final pick, 176th overall, was used to select defenceman and Rogers, MN product Mitchell Becker. This past season, the defender skated with the Rogers Royals Under-14 team in the MH-HS.

"A large shutdown defenceman with good offensive upside," Armstrong said. "He has the size to bring the puck up the ice and makes good first passes."

The WHL Bantam Draft is an annual event in which the clubs of the Western Hockey League select players who have graduated from bantam. For the 2016 draft, players born in 2001 are eligible. The Draft order is determined by way of points in the regular season, with the exception of teams that missed the WHL Playoffs which are placed into a draft lottery for the first round only. With the exception of the lottery results in the first round, teams will select in order of fewest to most regular season points.

The Royals’ 2016-17 Season Ticket Packages are on-sale now. Guarantee yourself the best seats, prices and benefits that includes the most flexible ticket exchange policy in the WHL. Secure your spot for next season by giving the Royals’ ticket office a call at 250-220-7889 or sending an email to tickets@victoriaroyals.com to set up an appointment to view available seating.
Posted by Marlon Martens at 19:01 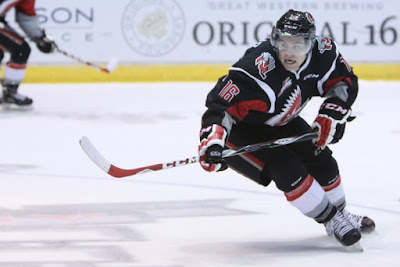 "A guy that plays a direct game...we're looking for a couple guys to replace some of the components that we're losing in terms of the physical side - and we feel Blake can do that." - Grant Armstrong, Assistant GM, Player Personnel

Victoria, BC- The Victoria Royals are pleased to announce that the club has acquired forward Blake Bargar (1998) from the Moose Jaw Warriors for a conditional eighth round pick in the 2018 WHL Bantam Draft.

The product of Torrence, CA recently completed his second season in the WHL with the Warriors and tallied two points (1g-1a) and 42 penalty minutes in 60 games. Bargar also played in seven post-season contests for the Warriors this year.

Bargar was originally drafted by Moose Jaw in the seventh round, 134th overall, in the 2013 WHL Bantam Draft.

The Royals’ 2016-17 Season Ticket Packages are on-sale now. Guarantee yourself the best seats, prices and benefits that includes the most flexible ticket exchange policy in the WHL. Secure your spot for next season by giving the Royals’ ticket office a call at 250-220-7889 or sending an email to tickets@victoriaroyals.com to set up an appointment to view available seating.
Posted by Marlon Martens at 16:51

For Immediate Release
Wednesday, May 4, 2016

Calgary, AB- The Victoria Royals are proud to announce that three members of the organization have won WHL awards, while the club was honoured with the WHL Marketing/Business Award.


Hear from all four winners: 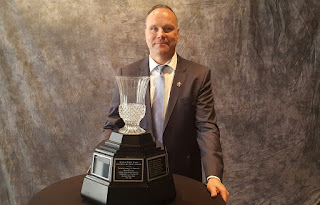 Victoria Head Coach Dave Lowry has won the Dunc McCallum Memorial Trophy after being chosen as the league’s Coach of the Year for the second time in the last three seasons. Lowry is only the 11th head coach in WHL history to have won the award two or more times.

In his fourth year with the club, Lowry guided the Royals to a WHL best 106 points and 50-16-3-3 record and the franchise’s first Scotty Munro Memorial trophy. 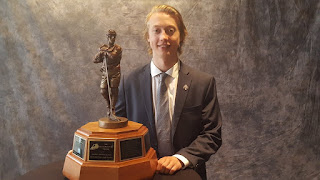 Victoria’s Tyler Soy has been recognized as the WHL’s Most Sportsmanlike Player, and was awarded the Brad Hornung Trophy.

Soy wrapped up the 2015-16 regular season second in team scoring with 85 points (46g-39a) and only 27 minutes in penalties. Soy led the team in goals with 46, and broke the Royals’ record for most markers in a single season. 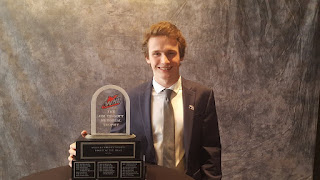 Royals’ 1998-born forward Matthew Phillips was named the recipient for the WHL’s Jim Piggott Memorial Trophy as the league’s top rookie. Phillips finished the 2015-16 regular season first in points (76) and goals (37) among all WHL rookies. Phillips also finished tied for first in the league in game winning goals (10), and tied for second in powerplay markers (16).

In February, in his hometown of Calgary, AB, Phillips set the new Victoria/Chilliwack franchise record for most goals by a rookie in a single season with his 33rd marker. Phillips passed former Chilliwack Bruin Oscar Moller, who scored 32 goals during the 2006-07 season.

The Royals were also recognized with the WHL Marketing/Business Award. 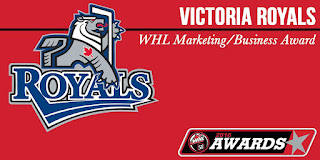 Victoria is one of nine franchises in the league to average attendance figures over 4,500 per game in each of the past five seasons. The club also achieved a 300% increase in sold out games from the 2014-15 campaign.

The Royals’ President & General Manager Cameron Hope along with defenceman Joe Hicketts were nominated for three awards, but were runner-up’s to their Eastern Conference counterparts. Lethbridge Hurricanes’ General Manager Peter Anholt was awarded the Lloyd Saunders Memorial Trophy as WHL Executive of the Year. Dryden Hunt of the Moose Jaw Warriors took home the Four Broncos Memorial Trophy as the league’s player of the year, while the Brandon Wheat Kings’ Ivan Provorov was recognized as the top defenceman in the WHL with the Bill Hunter Memorial Trophy.

The Royals’ 2016-17 Season Ticket Packages are on-sale now. Guarantee yourself the best seats, prices and benefits that includes the most flexible ticket exchange policy in the WHL. Secure your spot for next season by giving the Royals’ ticket office a call at 250-220-7889 or sending an email to tickets@victoriaroyals.com to set up an appointment to view available seating.
Posted by Marlon Martens at 15:10