Alex Forsberg was the overtime hero, lifting the visiting Victoria Royals to a 3-2 win over the Spokane Chiefs Wednesday, taking a 3-1 playoff series lead.

“It felt fantastic,” said Forsberg, “I didn’t really do a whole bunch the first three games, I was pretty frustrated.  To get it going is big for me.”
The Royals can win the series Friday night in Victoria.

“I really liked our game tonight, I liked our compete and our guys got what they deserved tonight just by how hard they worked.” Said Head Coach Dave Lowry,

It was Forsberg’s second of the game, Jack Walker had two assists and Matthew Phillips (2nd) tallied the other for Victoria.

“The bounce back effort,” said Lowry on what he liked about his clubs performance, after falling 5-2 one night earlier.

“…and how we were able to raise our level of compete and get back to playing our brand.”

“It was really exciting…I actually got my regular season start here too – it’s kind of a cool building to play in.” said Outhouse who led the league in goals against average and save percentage.

Outhouse also had a shutout in Spokane back on October 24th.

“We needed a different look,” said Lowry on the decision to bring in the rookie netminder after Coleman Vollrath played the first 3.

“We had to find a way to spark our team after last night…He’s played in a lot of big games.  The one thing that he does is that he settles in and plays.”

Joe Hicketts missed his third straight game (undisclosed), while veteran defenseman Ryan Gagnon drew back into the line up after serving the final of a 2 game suspension.

“It really settled our team down,” said Lowry on bringing Gagnon back in,“…It’s a big win.”

Spokane opened the scoring for a third straight game, but Victoria twice came back to tie.  Forsberg forced overtime scoring just 1:08 after the Chiefs took a 2-1 lead in the middle frame.

It was a scoreless third, and Victoria came out flying in the single overtime period. 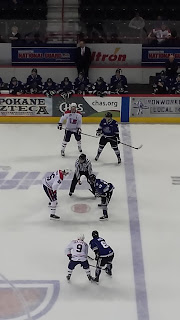 “I think it was the urgency that we knew how critical it was to get the win here tonight.” Said Lowry on the jump in the extra frame,
“We needed to find the energy, the step, to make sure we didn’t lose 2 games in a row…and I give Fisher a lot of credit, he got these guys ready to play tonight.”

“We know the fourth one is always the hardest one to win, and (the Chiefs) are going to come in with a purpose to try to bring it back to (Spokane)…and we want to do everything within our control to make sure that doesn’t happen.” Added Lowry.

Penalties-served by Andersen Spo (too many men), 8:50.

“And I’ll take blame for that, my responsibility is to make sure this team is ready to play…”

The Royals still lead the best of seven playoff series 2 games to 1.
“Battle level, compete, urgency, everything that you need to win at this time of year…” said Lowry about the difference in the game,

“For us it just was not a very good effort all around.”

The two clubs meet again Wednesday in Spokane, with Game 5 in Victoria on Friday.

The Chiefs built period leads of 2-0 and 5-0, before Victoria responded with a pair in the third.

“We started competing, and starting executing, and started playing the way we have to play,” according to Lowry on the clubs strong third.

“One thing we talked about, was that we have to find a way to generate some momentum, and I thought we did that in the third period.”

Spokane jumped to a 4 and 5-0 lead with a pair of goals just :29 seconds apart in the middle frame.

The Royals played a second straight game without veteran rearguards Joe Hicketts (undisclosed), and Ryan Gagnon who served the final of a two game suspension.

“When you take those guys out, other guys have to raise their game…” said Lowry.

Coleman Vollrath made 34 saves in the loss, while Lasse Petersen stopped 22 for his first win in the post season. 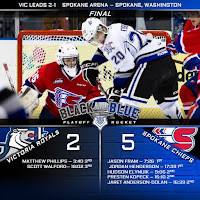 Spokane got goals from Jaret Anderson-Dolan (1g 1a), Jason Fram, Hudson Elynuik, Presten Kopeck, and Jordan Henderson.  Dominic Zwerger had 2 assists.
It was another physical affair with 48 minutes of penalties handed out, 38 of which went to the Royals.

“The physical part isn’t going to bothersome – I thought we managed it.” Said Lowry.

Victoria had their 7 game road win streak snapped, along with their 15 game win streak overall.

“It stings,” said Lowry, “You’re frustrated, but at the end of the day you’ve lost once in 16 games…we’ll be ready to go (Wednesday).

Radio: The Zone @ 91.3 fm www.thezone.fm/royals
Online: http://cjzn.streamon.fm/
The Royals won a pair of home games over the weekend by 5-3 and 4-3 scores on Friday and Saturday respectively, outscoring the Chiefs 9-6.

The line of Vladimir Bobylev (6a), Tyler Soy (3g), and Jack Walker (2g 1a) have combined for 12 points in the series so far for Victoria.

Defenseman Joe Hicketts (undisclosed) had 3 points (1g 2a) in the opener, but he along with Ryan Gagnon did not play in game 2.  Gagnon will serve the final of a 2 game suspension Tuesday.

Four Spokane players have 2 points so far, with Jacob Cardiff and Hudson Elynuik leading the way with a pair of goals each.  Keanu Yamamoto has 1g 1a, and Jason Fram 2 helpers for the Chiefs. 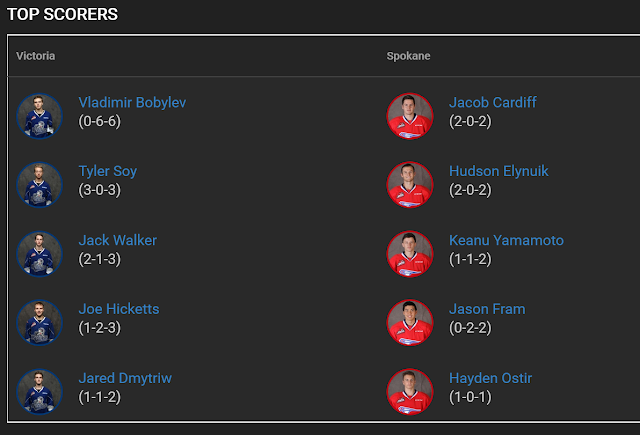 In the regular season, the clubs split the two games in Spokane, with the Chiefs winning 2-1 October 23rd, and the Royals responding with a 3-0 victory the following night.  Griffen Outhouse earned the shutout.

Victoria Netminder Coleman Vollrath stopped 30 of 33 Saturday, and has earned both victories thus far with a 3.00 gaa and 0.900 save %.  Lasse Peteresen has been between the pipes both nights for Spokane with a 4.08 gaa and 0.843 save %.

Victoria is 1 for 5 on the power play, while Spokane is 1 for 6 in the series.

How the 2 teams match up

Bobylev: Player Of The Week 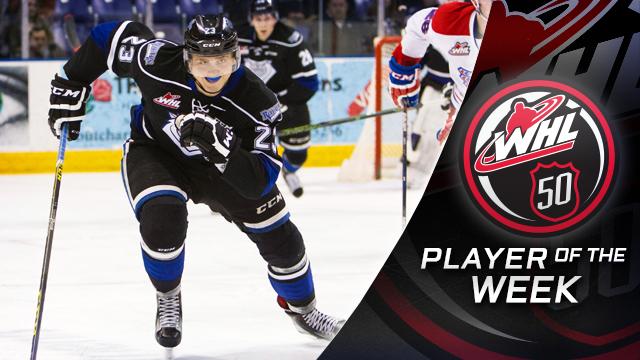 Victoria, BC- The Western Hockey League (WHL) today announced that Victoria Royals’ forward Vladimir Bobylev has been named the WHL Player of the Week.

Bobylev, a native of Lipetsk, Russia tallied six points (6a) in the Royals’ first two playoff games vs. the Spokane Chiefs this past weekend.

The 6-2, 202 lb Bobylev leads the league in playoff scoring. In his last 10 games including the regular season, Bobylev has recorded six goals and 16 assists for 22 points.

The 1997-born forward is in his first season with the club. In 72 regular season games with Victoria, Bobylev finished fifth in team scoring with 67 points (28g-39a).

In 124 career regular season games with Victoria and the Vancouver Giants (2014-15) Bobylev has registered 31 goals and 45 assists.

Game 3 and 4 of the best-of-seven series between the Royals and Chiefs is scheduled for tomorrow and Wednesday with puck drop at 7:05 p.m. for both contests.

Victoria’s next home game in this series (if necessary) will be Friday, April 1st with puck drop scheduled at 7:05 p.m. Single game tickets are on sale at the Select Your Tickets Box Office located at Save-On-Foods Memorial Centre, over the phone at 250-220-7777 or online at www.selectyourtickets.com.
Posted by Marlon Martens at 13:52 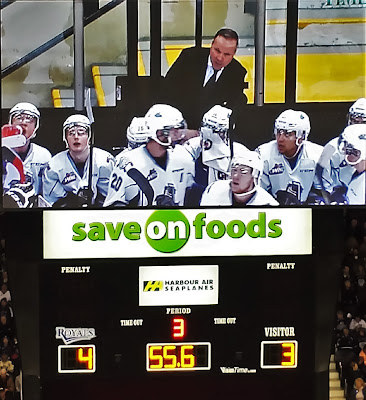 Walker broke a 2-2 second period draw, and Tyler Soy (3rd) added insurance in the third, before Dominic Zwerger brought the Chiefs to within one with the goalie pulled.

“We found a way to get it done tonight,” said Royals Head Coach Dave Lowry,

“They’re going to be hard fought games, close games, one goal games.  We have to make sure we continue to find a way.”

The Royals were without a pair of veteran defenseman, Joe Hicketts and Ryan Gagnon.

“We need different guys to step up, and as soon as we start relying on one or two guys we’re in trouble.  We’ve had really good balance, good depth throughout, good contributions from everybody, and we look forward to continuing that.”

While there was no word on Hicketts absence, the club was still waiting to hear from the WHL on the length of suspension for Gagnon after receiving a charging major and game misconduct in Game 1.

Jordan Wharrie was inserted into the line up bringing 11 games of past playoff experience with the Everett Silvertips, while Brayden Pachal played his first WHL playoff game and had an assist.  Rookie Scott Walford stepped up his game, and also helped out on the power play.

“I thought it was outstanding,” said Lowry on the younger defense coming through,

“When you have a 16 year old (Walford) as probably your best defenseman, your most physical, it bodes well moving forward…Pachal came into tonight and didn’t miss a beat.”

Spokane out shot Victoria 33-21, snapping the Royals stretch of 20 games in which they put more pucks on goal than the opposition.

Coleman Vollrath earned back to back wins, while Lasse Petersen took a second consecutive loss.

Victoria was 0 for 2 on the power play, while Spokane went 0 for 1.

Jacob Cardiff opened the scoring for the Chiefs, but Walker and Jared Dmytriw gave the Royals a 2-1 lead going into the second.

Hudson Elynuik tied the game at 2 early in the middle frame, for his 2nd of the post season. 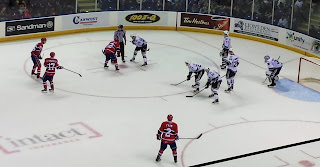 The line of Walker, Soy (1g) and Bobylev connected again for 6 points, giving them a combined 12 in the two games.

“My linemates and I are clicking,” said Soy who had 46 goals to lead the club in the regular season, a Royals record.

“Dave (Lowry) has been instilling in us all season long to play with speed, and play as fast as we can.  It’s something that we try to do every night.”

Victoria has now won 15 straight games, and 15 consecutive at home.

The Royals face the Chiefs in Spokane Tuesday and Wednesday.

“The one challenge, and they use it to their advantage is, the benches are reversed.  So you have a long change for two periods instead of one.” 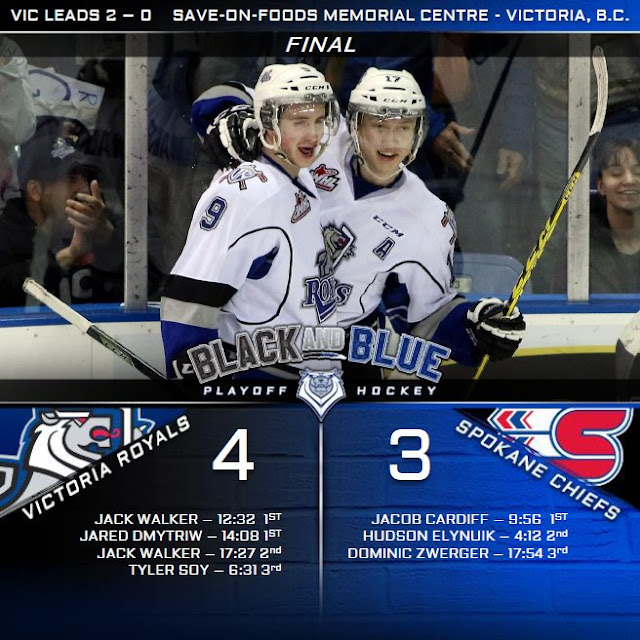