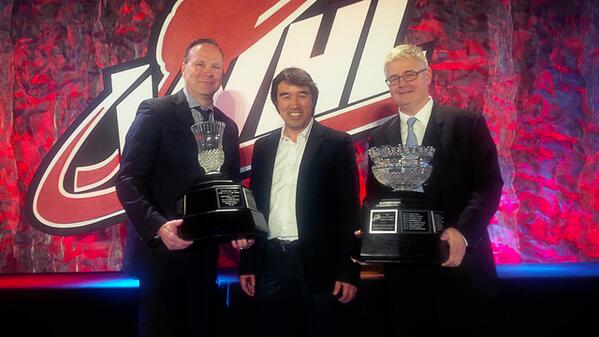 GM Cam Hope and Head Coach Dave Lowry of the Victoria Royals, both took home awards in the categories they were finalists for, at the WHL Awards Luncheon Wednesday in Calgary.

Hope won the WHL Executive of the year, while Lowry received Coach of the Year.

Both were in their 2nd year with the club that had a franchise best season, and fell in the 2nd round to the Portland Winterhawks.

In his second season as head coach of the Victoria Royals, Dave Lowry helped lead the Club to its best regular-season performance in franchise history, posting an impressive 48-20-1-3 record for 100 points and a third-place finish in the Western Conference.  Under Lowry’s guidance, the Royals skated to the fourth-best road record in the WHL and the WHL’s second-best defensive record, having allowed just 181 goals.  Under Lowry, the Royals boasted one of the most balanced attacks in the League with six players who reached the 20-goal mark.  Lowry’s Royals were also a model of consistency during the season, losing back-to-back games on only four occasions.

In his second season as general manager for the Victoria Royals, Cam Hope’s Club smashed several franchise records, including wins and points in a season with their 48-20-1-3 record and 100 points.  Under Hope’s management, the Royals improved their win total by 13 and their point total by 23 from the 2012-13 season while also reducing their goals-against by a whopping 71 goals.  In addition to helping develop a stable of young players such as Tyler Soy, Chaz Reddekopp and Jack Walker, Hope also bolstered his Club’s roster by acquiring impact players such as Axel Blomqvist and Travis Brown.

Hope receives the Lloyd Saunders Memorial Trophy as the Executive of the Year. In Hope’s second season as the general manager of the Royals, the Edmonton, AB native acquired players such as Travis Brown and Axel Blomqvist via trade to help bolster the team en route to a successful 2013-14 season. Hope also hired Lowry prior to the 2012-13 season.

Hope is the second general manager in team history and fourth in the franchise’s history. From 2007 to 2011, Hope served as the assistant general manager of the NHL’s New York Rangers. Hope is a graduate of the University of Alberta, with degrees in Arts (Sociology) and Law.

Lowry also recently completed his second season with the Royals and is the recipient of the Dunc McCallum Memorial Trophy. This season, Lowry guided Victoria to numerous franchise records including wins, points, fewest goals allowed (181) and road wins (26). Behind the bench of the Royals, Lowry helped Victoria finish the 2013-14 WHL Regular Season as the 10th ranked club in the BMO CHL Top 10 rankings.

Since joining Victoria, Lowry has posted an 82-50-3-7 regular season record as the Royals’ bench boss. Prior to joining Victoria, Lowry spent three seasons as an assistant coach of the NHL’s Calgary Flames and was also the head coach of the WHL’s Calgary Hitmen during the 2008-09 season when the Hitmen posted a 59-9-3-1 record en route to an Eastern Conference title. Prior to his coaching career, Lowry spent 19 seasons as a player in the NHL.

Hope was up for the 2014 Executive of the Year award alongside Eastern Conference nominee Mike Moore (Calgary), while Lowry competed against Shaun Clouston (Medicine Hat) for Coach of the Year honours.

Hicketts Wins Bronze at U18

“It’s not the medal we came here for, being Canadian we wanted the Gold.  Anytime you win your last game, and do earn a medal, it’s something special.” – Joe Hicketts

Canada, who won gold at this tournament last year were relegated to the Bronze medal showdown after falling 4-3 in overtime to the Czech Republic on Saturday.

Hicketts scored his lone goal of the tournament in that game.

“Not only in my career, I thought that was a really big goal in the game,” said Hicketts on bringing Canada to within one, 3-2 on Saturday,

“We generated some momentum off that goal, and starting rolling from there.  It’s a shame we couldn’t carry that into overtime - I think we just ran out of gas there.  Definitely one of the bigger goals of my career.”

The 17year old Hicketts ended the tournament with a goal and assist (2pts) in 7 games.

Hicketts is a dynamic offensive defenseman who shows great poise from the point. His skating and smarts help make up for team lapses on the ice while his shot and passing skills make him lethal in the offensive end.

The tournament also had the eyes of many NHL scouts, and bettered the unrated Hicketts chances of being selected higher after missing a large portion of the Royals season.

“I hope so, I thought I played well…this tournament gave the scouts a little more (time) to look at me.  Moving forward it can’t hurt, I’m going to be looking forward to draft day but if it doesn’t work out, that’s just another step in the process.  I’m going to keep working hard and I know that.”

Now, the long flight home after a lot of hockey which followed the Royals intense post season.

“Everyone’s happy, and excited.  It’s not the color we wanted, but anytime you win your last game, before a long flight…I think our mood is going to be very good.”

The United States defeated the Czech Republic 5-2 in the gold medal game.
--Marlon Martens
Posted by Marlon Martens at 12:39

Victoria, BC – The Victoria Royals are pleased to announce that Keegan Kanzig has been assigned to the American Hockey League’s (AHL) Abbotsford Heat by the Calgary Flames for the remainder of the 2013-14 season.

Kanzig recently completed his third season with Victoria, posting eight points (3g-5a) in 63 games to go along with 99 penalty minutes. The Athabasca, AB native has appeared in 196 career WHL games and has collected 17 points (3g-14a) and 324 minutes in penalties. The 19-year-old has also notched two points (1g-1a) with 31 penalty minutes in 17 career post-season games.

The 6-5, 242 lb defender was drafted by the Calgary Flames with the club’s third round selection, 67th overall, in the 2013 NHL Draft. Kanzig is the highest drafted player in Royals’ team history. Kanzig was signed to a three-year entry level contract by the Flames last December.

Kanzig was originally selected by the franchise in the 2010 WHL Bantam Draft with the club’s first round, seventh overall pick.

The WHL handed down some stiff suspensions and fine to the Victoria Royals Tuesday April 15th.

Victoria:     $10,000 for actions by Club deemed detrimental to the League at Portland on April 10

Steven Hodges:    5 games for g.m. at Portland on April 10
- He threw two separate punches at an unsuspecting opponent during altercation

Brandon Magee:  12 games for match penalty at Portland on April 10
- It is the second match penalty for the player this season
- There were separate crosschecks to the heads of two opponents during incident

Victoria, BC – The Victoria Royals would like to congratulate defenceman Joe Hicketts who has been added to Team Canada’s National Men’s Under-18 Team roster for the 2014 IIHF U18 World Championship, taking place between April 17-27 in Lappeenranta and Imatra, Finland.

This will mark Hicketts’ second stint with the National Men’s Under-18 Team. His first taste of action with the Under-18 team came when he suited up for Team Canada one year ago as an underage player. Hicketts took part in two exhibition games at the 2013 IIHF Under-18 World Championships in Sochi, Russia.

Hicketts recently completed his second season with the Royals and has 48 points (12g-36a) in 104 career WHL games. The Kamloops, BC native has also picked up three assists in 15 career playoff games.

Drafted 12th overall in the 2011 WHL Bantam Draft, Hicketts is no stranger to Hockey Canada. The 5-8, 186 lb rearguard won a gold medal with Team Canada at the 2013 Memorial of Ivan Hlinka Tournament where he was named an alternate captain. Hicketts was also named captain of Team Pacific for the 2013 World Under-17 Hockey Challenge where he registered six points (1g-5a) in five games of competition. Additionally, the blueliner was named as the captain of Team Canada for the 2012 Winter Youth Olympic Games where he collected five points (0g-5a) en route to a bronze medal.

It was a good news, bad news Tuesday for the Victoria Royals.

The good news is defenceman Joe Hicketts, left off Central Scouting’s rankings for the 2014 NHL draft after missing a large chunk of the Western Hockey League season to shoulder surgery, will get a second chance to make an impression on pro scouts.

The Royals confirmed Hicketts has been named to the Canadian roster for the IIHF under-18 world championship that starts Thursday and runs through April 27 in Finland.

“It’s good for Joe because he missed a lot of the season. This gives him a chance to build on the season,” said Royals head coach Dave Lowry.

Canada, which beat the host Finns in an exhibition Monday, opens pool play Thursday against Sweden before playing Germany on Saturday, Slovakia on Sunday and Russia next Tuesday. The national side is coached by Kevin Dineen, who is just off guiding Canada to the gold medal in women’s hockey at the 2014 Sochi Winter Olympics.

The bad news for the Royals is the WHL threw the book at them for incidents in their final playoff game. The team was fined $10,000 for “actions [in Game 5 of its Western Conference semifinal series against the Winterhawks] deemed detrimental to the league at Portland on April 10.” The largest previous fine this season levied against a team by the league was $500.

Also, forward Brandon Magee was suspended for 12 games and Steven Hodges for five at the beginning of next season, if they return to the club as overage 20-year-olds.

“We are disappointed we were involved [in the incidents],” Lowry said. “It was uncharacteristic of our club. We’ll have to deal with them [fines and suspensions]. ”

There is a chance Hodges, a draft pick of the Florida Panthers, could play minor-pro next season. Magee, however, has had no pro offers to date and is strongly expected to fill one of the Royals’ three overage slots for next season. If Magee indeed doesn’t go pro and is still available, the 12-game suspension won’t change the Royals’ thinking about bringing him back.

“Brandon Magee is going to play on our team,” said Lowry.

The league said Hodges was suspended because “he threw two separate punches at an unsuspecting opponent.” The WHL cited Magee for “separate crosschecks to the heads of two opponents” and noted “it is the second match penalty for the player this season.”