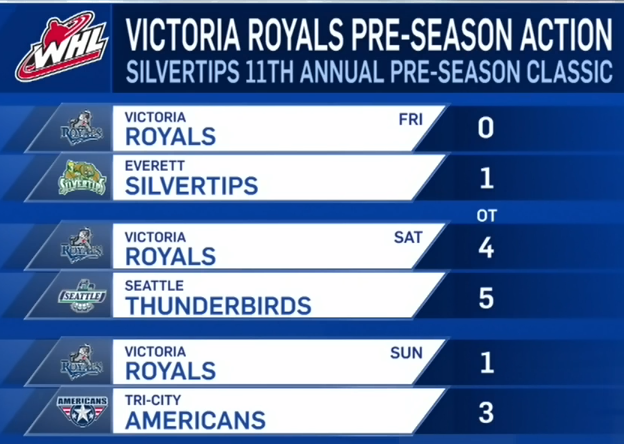 EVERETT – The Victoria Royals wrapped up 3 pre-season games in 3 days with a 3-1 loss to the Tri City Americans at Everett’s 11th annual Holiday Inn Preseason Classic.

“It was very similar to the first two games we played,  where the guys fought hard and Tri City dressed a more veteran line up…” GM Cam Hope

The Royals led 1-0 mid way through the second, with ’99 born Ryan Peckford beating Winnipeg Jets drafted goaltender Eric Comrie.  The Americans added a pair and then an empty netter to seal the victory.

“We had a lead for a while, it was a close game but in the end their veteran guys came through and pulled it out for Tri City.” According to Hope

The Royals fell 1-0 to the Silvertips Friday, and 5-4 in overtime to the Thunderbirds Saturday.

Victoria dressed a much younger lineup each game, about half of the roster were first year players.  The Royals did not bring any overagers on the exhibition trip.

“Wins don’t matter, we made the decision not to bring any veterans guys to put the games of this tournament on the shoulders of our young guys and give them a real test – and I thought they stood up well.” Said Hope

Victoria was without veterans Keegan Kanzig, Austin Carroll and Travis Brown who didn’t make the trip.  Last seasons club scoring leader Brandon Magee is suspended while Axel Blomqvist is with the Swedish junior national team at the Four Nations tournament in Europe.

The club also battled illness as ’98 born forward and first round selection Dante Hannoun only played one game.

The veterans are expected to be worked back into the line up next weekend in the Tournament in Vancouver against Kamloops and Kelowna.

The 2014 bantam selections are heading home back to their midget teams, like first round selection defenseman Scott Walford and forward Ryan Peckford.

Reassignments will be made over the next month or so according to Hope,

“We have to be mindful of the fact that we have 6 players going to NHL camps.  It gives us an opportunity to give guys a much longer look than we would normally – and that’s good.”

Netminder Michael Herringer played his second game of the weekend stopping 23 of 25, and only allowed 1 goal in the loss to Seattle.  He sports a 1.53 gaa and 0.939 Sav % after 2 games.

The Royals outshot the Americans 31-26.  Victoria was unable to strike on 10 power play opportunities, again without veteran scorers working the man advantage.  Tri City was 0 for 3.

Everett, WA – The Victoria Royals could not fend off a Tri-City Americans third period rally and fell 3-1 on Sunday afternoon at the Silvertips 11th Annual Pre-Season Classic Tournament in Everett.

A young line-up was featured for Victoria for the third time in three days with nine rookies participating in today's game. Rookie netminder Michael Herringer tended the net for Victoria. The 1996 born goalie was coming off a solid showing against Everett on Friday evening.

The Royals got on the board first early in the second period when rookie Ryan Peckford (1999) notched his first WHL pre-season goal. Victoria would hold the lead until Tri-City found the back of the net three times in the third period. Jackson Playfair scored the winning goal, Jordan Topping and  Justin Marreck (empty net) had the other markers.

‎Victoria couldn't get a puck past Comrie on special teams as the power play went 0/10=0.0%. The Royals did hold Tri-City off the board on the man advantage as the Americans went 0/3 = 0.0%.

The Royals now head to Delta, BC's Sungod Arena for games next Friday and Saturday. Victoria will tangle with Kamloops on Saturday at 3 p.m. Before meeting the Kelowna Rockets at 1 p.m. on Sunday in the Lower Mainland.

Season tickets start from $414 and mini-packs from $49 are on sale now! Call 250-220-7889, visit www.victoriaroyals.com, or head down to the Victoria Royals ticketing office at Save-On-Foods Memorial Centre to pick up your seats and guarantee your spot at the September 26th home opener
Posted by Marlon Martens at 15:08

EVERETT – The Victoria Royals came from behind to tie in the third, but fell 5-4 in overtime to the Seattle Thunderbirds at Evertt’s 11th annual Holiday Inn Preseason Classic Saturday.

The Royals again, as in the 1-0 loss to the Silvertips a night earlier, dressed a much younger line up.

“We’re playing teams that have three 20 yr olds, and a lot of veterans in their line up.” said Head Coach Dave Lowry.

Victoria is without veterans Keegan Kanzig, Austin Carroll and Travis Brown who didn’t make the trip to Everett. Brandon Magee is suspended while Axel Blomqvist is with the Swedish junior national team at the Four Nations tournament in Europe.

“We have 9-10 kids playing each night, I really liked the way our young guys competed, sticking their nose in and working.”

Down a pair of goals heading into the final frame, the Royals responded with a pair from third year forwards Mitch Skapski and Brandon Fushimi before Ethan Bear notched the overtime winner.

Evan Smith went the distance for the Royals, stopping 35 of 40.  The 6’6 Parker Colorado product is in a goaltending battle with Michael Herringer of Comox who stopped 23-24 in a 1-0 loss one night earlier.

“It’s exactly what we want.  We want it to be a three-way battle for guys to play in the net and both guys who’ve played so far have done a real good job.”

The T-birds outshot the Royals 40-33, but Victoria outduelled them with the man advantage going 2 for 7, while Seattle went 1 for 3.

“They were keeping it simple, getting pucks in and around the net…” said Lowry on the success of the power play, “…just trying to take advantage of opportunities.”

The contest was physical, as Slovakian newcomer, forward Kristian Ferletak showed his gritty side according to Lowry,

“His first shift he had a couple really big hits, and that set the tempo for the game. (Seattle) came out and were physical – that’s the way they always play…with the line up we had, we matched it.  (Ferletak) was one of the guys that was initiating it as well."

As for the younger players, more time is needed in the evaluation process.

“It’s still early, they’ve only played one game – some two.  It’s going to be a battle, going to see this week how things start playing out.” said Lowry

Victoria wraps up the 3 game tournament in Everett Sunday morning at 11:30 against Tri City.

(Remaining Games in Preseason Schedule below)

Everett, WA – The Victoria Royals dropped a 5-4 decision in overtime to the Seattle Thunderbirds on Saturday afternoon at the Silvertips 11th Annual Pre-Season Classic Tournament in Everett. The Royals battled back from a two goal deficit after two periods, but Ethan Bear scored the overtime winner for Seattle.

The rookies took center stage again today for Victoria with 11 first year players in the line-up. Newly signed goaltender Evan Smith got his first start at the WHL level for the island squad. Victoria also saw the debut of their 1999 second round draft pick Ryan Peckford who notched an assist on the Royals' first goal of the day.

The teams traded goals in the first frame, but it was all Seattle in the second period as they outscored the Royals 3-1 to lead 4-2 after 40 minutes. Victoria controlled the third period with goals from Mitch Skapski and Brandon Fushimi sending the game to overtime.

The Royals first two goals of the game were scored by ‎Jared Dmytriw and Matthew Campese. The other Seattle goal scorers were ‎ Justin Hickman, Lane Pederson, Keegan Kolesar and Matthew Wedman.

Evan Smith had a good showing in net for the Royals making 35 saves on 40 shots. The Royals directed 33 shots on Seattle netminder Danny Mumaugh.

The Royals wrap up the three-game tournament in Everett with an 11:30 a.m. match-up against the Tri-City Americans on Sunday. Tri-City has dropped both of their games this weekend with a 4-0 loss at the hands of Seattle on Friday and on the wrong end of a 5-2 score against Portland on Saturday.

Season tickets start from $414 and mini-packs from $49 are on sale now! Call 250-220-7889, visit www.victoriaroyals.com, or head down to the Victoria Royals ticketing office at Save-On-Foods Memorial Centre to pick up your seats and guarantee your spot at the September 26th home opener
Posted by Marlon Martens at 18:28

EVERETT – The visiting Victoria Royals outshot the host Silvertips 26-24 but were blanked 1-0 in their first preseason game Friday night at Comcast Arena.

Everett defenseman Jordan Wharrie was the only Silvertip to beat Michael Herringer who went the distance for the Royals.  Goaltenders Austin Lotz and Nik Amundrud combined for a 26-save shutout.

Victoria, BC – The Victoria Royals kicked off their 2014 exhibition schedule on Friday evening in Everett, WA with a 1-0 loss to the host Silvertips. The Royals are one of six teams competing in the Silvertips 11th Annual Pre-Season Classic Tournament.

Royals head coach, Dave Lowry, used the first game of the weekend to take a look at the younger players remaining on the roster. Victoria started‎ nine rookies in their line-up while at the same time opting to not dress any 20-year-olds.

Rookie goaltender Michael Herringer (1996) went the distance for Victoria allowing one goal on 24 shots, and had a solid outing. The Royals also saw 1999 draft picks defencemen Scott Walford (#18 overall) and Brayden Pachal (#40 overall) get their first taste of WHL action. The Royals used a physical style to keep pace with Everett and outshot them 26-24 on the night.

Everett dressed a veteran laden line-up for their first exhibition game of the year , and that experience helped propel them to the victory. The games lone goal occurred early in the second period when defenceman Jordan Wharrie (1997) slide down from the right point and buried a slick centering pass from the left wing corner by Logan Assman (1995). The second assist on the play went to Remi Laurencelle (1995).

Goaltenders Austin ‎Lotz (1995) and Nik Amundrud (1997) shared the shutout for the Silvertips stopping 12 and 14 shots respectively. Everett was awarded six powerplays on the night and Victoria received two opportunities. Neither team was able to capitalize while skating with the extra attacker.

The Royals will now face the Seattle Thunderbirds in the second game for both teams in the tournament at 3 p.m. on Saturday. Seattle downed Tri-City 4-0 on Friday in their first pre-season contest.  The Royals wrap up the three-game tournament in Everett with an 11:30 a.m. match-up with Tri-City on Sunday.

Season tickets start from $414 and mini-packs from $49 are on sale now! Call 250-220-7889, visit www.victoriaroyals.com, or head down to the Victoria Royals ticketing office at Save-On-Foods Memorial Centre to pick up your seats and guarantee your spot at the September 26th home opener

The Royals Preseason Roster as found on:
http://www.whl.ca/schedule/show/game/67912

According to Cleve of the Times Colonist, Veterans Keegan Kanzig, Austin Carroll and Travis Brown won’t be making the trip to Everett.  Axel Blomqvist is with the Swedish junior national team at a tournament in Europe.

6 Royals veterans are attending NHL rookie camps starting Sept. 9. Joe Hicketts will be with the Red Wings, Brown with the Senators, Blomqvist with the Jets and Carroll, Kanzig and Magee with the Flames.
http://www.timescolonist.com/sports/it-s-crunch-time-for-victoria-royals-hopefuls-1.1332063#sthash.RRi7yAHB.dpuf