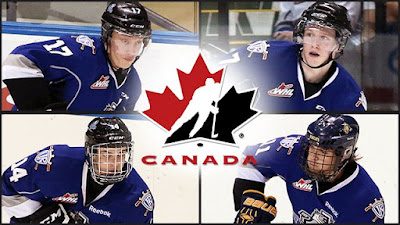 Victoria, BC- The Victoria Royals are proud to announce that Tyler Soy, Scott Walford, along with signed prospects Eric Florchuk and Kaid Oliver have been invited to attend three of Canada’s National Junior Team Summer Selection Camps.

The development camp will see 41 players born in 1997 or later from across Canada compete for a spot on the World Junior team. The camp will take place from July 30th to August 2nd in Toronto, ON. The annual tournament will be held in Montreal, QC and Toronto, ON from December 26, 2016 to January 5, 2017.

Last summer, Soy was a member of Hockey Canada’s Under-18 team at the 2015 U18 World Hockey Championships in Zug and Lucerne, Switzerland. Through four games, Soy collected two assists.

During the 2015-16 campaign, the Victoria centre tallied 85 points (46g-39a) that included a new Royals’ goal scoring record. Through 13 playoff games this year Soy scored seven goals and five assists for 12 points. The Cloverdale, BC product was named the recipient of the Brad Hornung Trophy as the WHL’s Most Sportsmanlike Player at the end of the season.

Walford, a 6-1, 188 lb defender has been selected to Hockey Canada’s National Men’s Under-18 Summer Selection Camp in advance of the 2016 Ivan Hlinka Memorial Cup.

The selection camp will take place from July 26th to August 2nd at the Markin MacPhail Centre in Calgary, AB and will see 44 players born in 1999 from across Canada compete for a spot on the team. The Ivan Hlinka Memorial Cup is scheduled for August 11-16 in Breclav, Czech Republic and Bratislava, Slovakia.

Last summer, Walford was a member of Team Canada Black at the 2015 World Under-17 Hockey Challenge in Dawson Creek, BC. The Royals’ blueliner played in all five of Canada Black’s contests during the tournament and picked up two minutes in penalties.

In his first WHL season, the native of Coquitlam, BC appeared in 36 games and tallied 11 points (1g-10a) for Victoria. Walford also played in 13 post-season games with the Royals and scored six points (2g-4a) to finish second in team scoring by a defenceman.

Royals’ prospects Eric Florchuk and Kaid Oliver have both been invited to Canada’s National Under-17 Development Camp prior to the 2016 World Under-17 Hockey Challenge.

From July 26th to August 1st, 111 players will participate in practices and games on one of six teams: Black, Blue, Gold, Green, Red, and White. Following the development camp, players will continue to be evaluated through the early season before 66 are selected to represent Canada on one of three national teams (Team Canada Black, Team Canada Red, and Team Canada White) at the 2016 World Under-17 Hockey Challenge, scheduled for October 30th to November 5th in Sault Ste. Marie, ON.

Florchuk, a forward, played in 32 contests this season for the Fort Saskatchewan Rangers Midget AAA team of the Alberta Midget Hockey League. During the regular season, the native of Fort Saskatchewan, AB tallied 12 goals and 13 assists for 25 points. Florchuck was originally drafted by the Royals in the first round, 13th overall, in the 2015 WHL Bantam Draft.

Oliver, a native of White Rock, BC spent the 2015-16 season with the Arizona Bobcats U16 team of the North American Prospects Hockey League (NAPHL) where he recorded 24 points (16g-8a). The forward was selected in the third round, 57th overall, by the Royals in the 2015 WHL Draft.