The clubs split their previous meetings, Victoria winning a 4-3 shoot out Sept 28th, then dropping a 3-0 decision two nights later, both games on the Island.

The Royals are on a 2 game road win streak and first in the Conference, following a 2-1 decision in Vancouver Sunday and a 4-3 shoot out victory in Tri City Saturday.

The Blazers are one point back and riding a 3 game win streak.  They have yet to lose in regulation this season.  Their only loss game at the hands of the Royals.  Most recently they defeated the Tigers 4-1 and the T-birds 7-2.

Ranked 3rd in the country, Kamloops boasts a potent offense, as on average, they’ve scored the 2nd most goals in league.

The Blazers offense just got a boost with the return of Brendan Ranford from Hamilton Bulldogs training camp, scoring 5 points in his first game back.

By only allowing 3 goals against over their last 3, Kamloops has become the stingiest team in the WHL.

Blazers forward JC Lipon is the WHL Player of the Week, collecting seven points, in the teams last two games.

Victoria is led in scoring by Alex Gogolev with 11 points.  Brandon Magee leads the team in goals with 6 and is riding a 4 game point streak.  Logan Nelson also has points in 4 straight and has 9 points on the season, good for second best on the club.

Netminder Patrik Polivka is tied for second in the league in wins with 5 in 6 games.  Blazers Cole Cheveldave holds claim to the 3rd best goals against average (1.64) and save percentage (.936)

It’ll be defenseman Joe Hicketts first regular season game in his hometown of Kamloops.  The Royals 1st ever bantam pick 12th overall in 2011 already has 4 points (1g 3a) on the season.

With a home win against Kamloops under their belt, Victoria looks to collect their first win in Kamloops since the franchise moved to the Island.

Tonight it’s first versus second, as the Royals put their 2 game road win streak on the line against the Blazers in Kamloops while wrapping up 4 consecutive on the road. 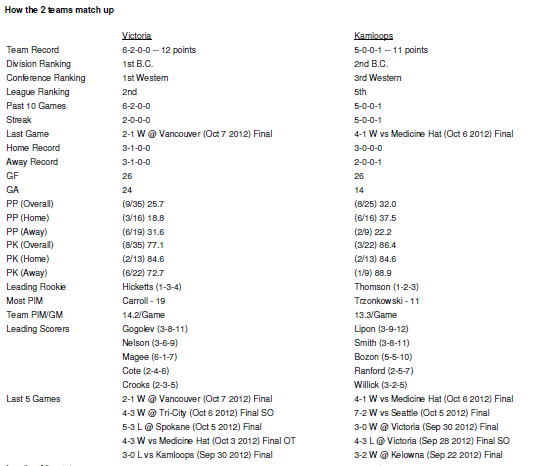