"We were opportunistic tonight...and the guys were disciplined...it's a sign of team that's coming together a little bit."  Assistant coach of the Royals, Ben Cooper.

Former Royal Zane Jones opened the scoring on breakaway in the second before Victoria replied with 3 unanswered. 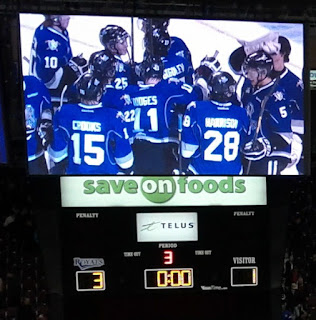 Royals forward Steven Hodges in his first game back after missing 8 games due to a lower body injury, and evened the score in the middle frame.  He started on the fourth line to test his conditioning, but quickly moved into the top six according to Cooper.

"He was pretty effective, it's unbelievable how many penalities he draws because he's so shifty and so fast.  Guys have a hard time keeping up with him, especially down low, you really notice that.  He was opportunistic in front of the net, good deflection (on the goal), played really well."

Gogolev scored the eventual game winner off a feed from Brandon Magee.  The Russian added an insurance marker into an empty net with 14 seconds left to seal it for Victoria.

"This was another chance to beat one of the top teams and we were really happy that we're able to get the win tonight." said Cooper in regards to challenging the club after falling short previously to the top seeded Blazers.

Five of Victoria's eight wins now have been of the come from behind variety.

Ben Walker with 2 assists, and 5 points in his last 2 games, was a +3 on the night.  Calgary forward Brooks Macek had his 10 game point streak snapped.

Patrik Polivka kicked out 20 saves for his 6th win, while Chris Dreidger allowed 2 on 28 Victoria shots.

Victoria did not allow Calgary a single power play all night, while being shut out on 5 Royals chances.

Victoria takes the first of 3 meetings this season and will clash again in Calgary on Nov. 9th.

With the victory, the Royals improve to 5-2 at home, and into a tie for 2nd in the Western Confernce with Tri City.

Victoria with a 2-1 record on the current four game home stand entertain the Brandon Wheat Kings on Tuesday, before playing 7 consecutive on the road.