In their only previous meeting, back on January 14th Ben Walker had 2 assists and scored the shoot out winner in 4-3 victory in Brandon.  The game took place just days after Kevin Sundher was dealt to the Wheat Kings for Jordan Fransoo and Dakota Conroy.

After knocking off the Hitmen 3-1 Thursday, the Royals are riding a 2 game win streak.  Victoria is tied for 4th in the Western Conference with 8 wins in their first 12 contests – 5 of those have been ‘come from behind’ victories.  After the same amount of games last season Victoria was at an even .500.

The Brandon Wheat Kings kicked off the season winning 4 straight, but since then have won just 2 of their last 8 games.  They’ve dropped their last two contests on the road, 4-2 at Kelowna Saturday, and 6-1 in Lethbridge last Wednesday.

Against the Rockets, the Wheaties gave up a pair of short handed goals and found themselves down 3-0 in the second period.  Their power play went 0/4, but penalty killing stopped all 4 Kelowna chances.  Brandon is now 3-for-35 with the man advantage over the last eight games.

19 year old netminder Corbin Boes who’s handled the majority of the duties this season between the pipes, allowed 4 goals on 35 shots in the loss for his 4th loss of the season.

The Wheat Kings are 1-2 on a 7 game road swing with the victory coming at the start in Medicine Hat by a score of 7-6.

Victoria native and former Saanich Brave, Jack Palmer is a 17 year old centerman for the Wheat Kings.  He was the VIJHL Rookie of the year this past season with 53 points in 37 games (24g, 29a) and now is still looking for his first WHL point after 8 games with Brandon this season.  His father Brad is from Duncan, and played 168 games in the NHL with Boston and Minnesota.  The North Stars drafted him 16th overall in the 1980 draft after playing for the WHL Victoria Cougars.

For the Royals Ben Walker has 5 points (2g, 3a) in his last 2 games, while Wheat Kings forward Alessio Bertaggia is riding a four game point streak (5 G, 2 A). 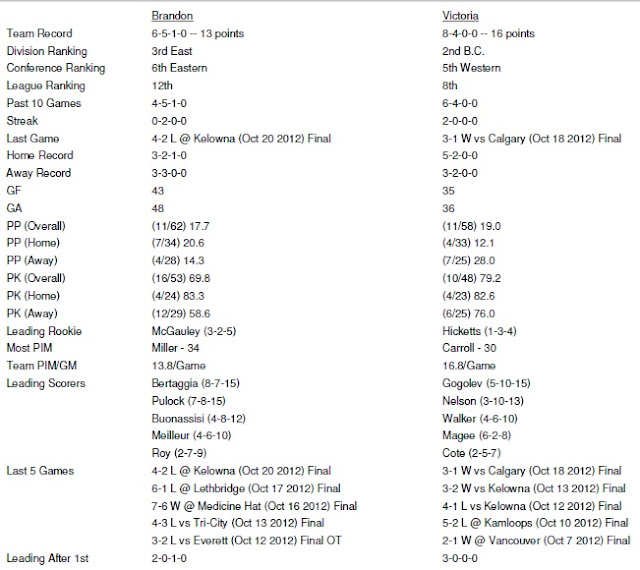